The Culture War Over Our Fiscal Crisis 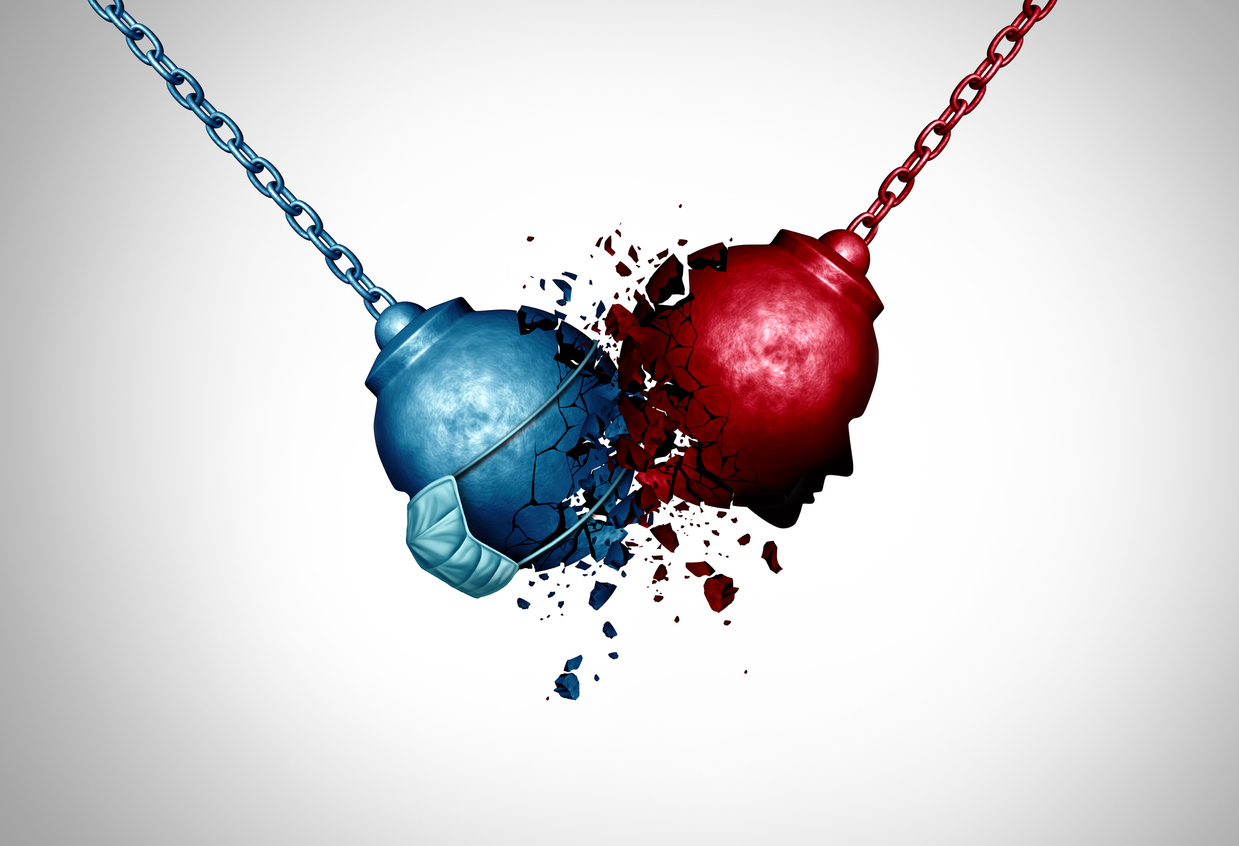 There seems to be no shortage of explanations these days for America’s unrelenting political polarization: addiction to outrage, populist suspicion of the elites, a psychological preference for revenge over compromise, racial and gender differences, even an epidemic of loneliness that has presumably led to the collapse of online decorum.  But while some of these factors may indeed intensify the squabbling, it is difficult to ignore how closely the rise of partisan acrimony has paralleled the country’s worsening fiscal crises.

Ever since the fight over who rightfully won the 2000 presidential election, which for many observers was the time when normal political bickering seemed to permanently escalate, the national debt has grown fourfold from $5.5 trillion to almost $22 trillion, or an astonishing one million per taxpayer.  Increasing state and city liabilities for unfunded public pensions, which the Wall Street Journal recently estimated to be larger than the entire German economy, have added trillions more.

Contributing even further to America’s growing debt problem are the predicted insolvency of its two biggest entitlement programs.  According to their own trustee reports to Congress, Social Security will lack adequate funding by 2034 and Medicare even sooner, by 2026.

The connection between fiscal stress and political polarization is not hard to understand, once we remember that most democratic elections are vote buying exercises.  Those on the left are usually more blatant, offering constituents some new or enhanced entitlement; but the right has its own expensive priorities and often feels compelled to counter the opposition’s agenda with a leaner version of its own.  Both parties claim they can fully pay for their respective promises but in the end find it politically easier to charge much of the cost to future generations.

Historically, this vote-buying system works reasonably well until the inevitable point where interest on the accumulating debt begins to limit what either party can realistically offer.  And as it becomes clear that government will have an increasingly difficult time, not only funding any new benefit, but even making good on those previously promised, factions instinctively mobilize to protect their respective gains.

Those who have become dependent on government largess or who have bet their retirement security on public pensions or who simply lack the skills to prosper are quite naturally attracted to redistributionist ideologies.  At the same time, those who already pay most of the income taxes (as well as those who aspire to someday be similarly well-off) predictably believe it’s better for government to raise needed revenue by incentivizing ambitious people to work even harder and invest even more.

Advocates of the later policy can at least cite historical precedent.  From the 1920’s tax reforms of Secretary of the Treasury Andrew Mellon to President Reagan’s supply-side economic policies, dramatically cutting taxes and regulation has clearly increased government revenues.

But as Connecticut hedge fund manager Ray Dalio argues in his recent book Principles for Navigating Big Debt Crises, it is possible for a country’s fiscal holes to become so deep that not even a growth-oriented tax policy can adequately fill them.  This is, in fact, the situation that America (and much of the rest of the industrialized world) seems to have backed itself into over the last two decades and goes a long way toward explaining the bitter political divide.

Despite clear benefits from the 2017 GOP tax bill, concludes Goldman Sachs chief economist Jan Hatzius, the long-term fiscal outlook for the U.S. is still “not good.”  Even without COVID spending, he predicts annual federal deficits more than doubling within the decade to $2.05 trillion (7 percent of GDP) and warns that the country’s very stability is at risk when the next recession comes.  Mercatus Center senior research fellow Veronique de Rugy nervously agrees.  “The continued rise in federal debt is “shocking,” she says, considering the economy is growing faster than it has for a while. Even worse, there’s no end of that red ink in sight.”

As for states and cities, a recent report by the U.S. Government Accountability Office (GAO) predicts a stormy fiscal future for many of them, with Medicaid and pension expenses continuing to outpace tax revenues from the improving economy.  Indeed, the Pew Foundation has estimated that even if state pension portfolios were to somehow grow at an historically high rate of 6.5 percent a year, they would still end up $1.7 trillion short of their obligations.

In other words, all levels of government remain on economic trajectories that fall short of fulfilling their promises, no matter how much further unemployment goes down or the stock market goes up.  And as the time has narrowed to address this problem, both the intended beneficiaries of government programs and those likely targeted to make the programs solvent are doing their best to undermine each other’s credibility, even over issues that have nothing to do with money.

All this is not to suggest that every extreme political position is based on a careful or even conscious calculation of how it would impact the resolution of America’s fiscal crisis.  But at the same time, it isn’t hard to predict where someone stands on almost any issue today once you know how he or she relates to public programs: as a potentially vulnerable beneficiary or as a potentially besieged taxpayer.

Many knowledgeable observers, including Dalio, would argue that such political squabbling is ultimately pointless, as the outcome of America’s fiscal crisis is pre-ordained.  History already tells us that the only socially acceptable way for governments to manage insupportable debt is by spreading the pain as broadly as possible, forcing every interest group – bondholders, taxpayers, recipients of public programs, and government employees – to take a hit.  Not because this is fair, but because shared sacrifice is the only way to stop a verbal civil war from becoming a real one.

Unfortunately, it is also true that what constitutes an equal sharing of local, state, or federal liabilities is open to considerable interpretation.  A “fair” distribution of financial pain is, in the end, a compromise among elected officials who owe their positions in large part to the activism of their respective party’s most extreme and uncompromising voices.

Once more, the electorate’s eventual reconciliation to burden-sharing opens new political divisions which also must be healed, as each faction comes to terms with what it will sacrifice for the greater good.  Do public employee unions do their part by accepting reduced retirement benefits or by signing onto economical education reforms like school choice?  Do taxpayers do their part by consenting to higher levies or by tolerating reduced public services?  Do Social Security recipients want lower monthly checks or a higher retirement age?

We are already seeing some of these intra-factional controversies begin to play out in Atlanta, Detroit, Jacksonville (FL), Lexington (KY) and other fiscally distressed cities where government workers, their pensions threatened by the prospect of municipal bankruptcy, have had to decide which is worse: salary cuts, workforce reductions, or compelling new hires to live with fewer benefits.  And in struggling Illinois towns like Harvey and Rockford, where local courts have ruled onerous pension obligations inviolable, it is the taxpayers who are choosing what to give up: the local library, summer recreation programs for the kids, or well-maintained roads.

Finally, there are many actors who have profited disproportionately and even illegally from America’s debt problems and have no interest in solving them.  From company officials and union leaders who have successfully lobbied for unwarranted government benefits to doctors and home healthcare providers who annually commit an estimated $41.1 billion in Medicare fraud, many know that the resolution of America’s financial crisis means more than a reduction of accustomed income.

Just as Lehman Brothers and Bear Stearns had to be sacrificed during the 2008-2009 subprime mortgage crisis as a warning to future generations not to repeat the same mistakes, so getting most Americans to finally share in the pain of writing down massive government debt will require the visible punishment of its worst contributors.  The most unfairly subsidized industries, the most extravagantly pampered public employee unions, the most irresponsibly indebted cities, the most dishonest medical practitioners, and perhaps even one or two profligate states will be shoved into the unpleasant historical role of cautionary example.

The good news is that there will come a day when, despite all these obstacles, the public debt has grown so large that bond investors will no longer support it. This will be the event that finally forces all factions to negotiate a shared sacrifice and, after the last hysterical screams, allows the political rhetoric to ebb to a less strident norm.  The bad news is that collective economic pain will be far greater than it would have been, if such an agreement were possible today.